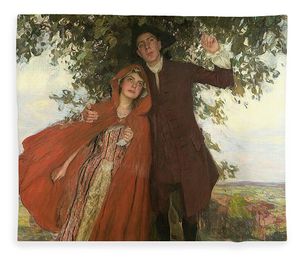 Hardy sets the scene for seduction at the outset of Tess of the d’Urbervilles. In his belief that characterization is fate, John Durbeyfield’s encounter with the parson was the first event that led toward Tess’ doom. Every event preceding that fateful night was part of the chain of events that led to the rape of Tess.

On that inevitable evening we find Tess walking with the group of workers back to Trantridge. The conflict occurs with the Queen of Spades and in accepting Alec d’Urberville’s assistance, in remedying Tess’ unfortunate situation; in his supposedly serendipitous rescue, she is once again an unwilling victim of fate. In his seemingly chivalrous rescue of her, her subsequent learning of her father’s new horse, and Alec’s unbridled devotion to her, puts Tess in an ominous and unfortunate predicament of obligation. This conflict between the morals of a haggler’s daughter, her guilt of an obvious, unavoidable indebtedness, her dread of an unscrupulous, undesired relationship with Alec, and her maiden-like naïveté and innocence make Tess’ seduction possible. This confusion and inner turmoil cause insecurity and apprehension which can not prevent the ensuing events.

After her auspicious rescue by Alec, Tess starts to doze. This sleep is inspired by her fatigue and also an unconscious trust that Alec will deliver her home without further mishap. Alec betrays this trust and with ulterior motives goes instead to The Chase. The Chase is symbolic of Alec’s unrelenting pursuit of Tess (evident by the name) and the fact that it is unknown territory (much like Tess herself) that has until now remained largely unexplored, or unconquered. Tess wakes up to discover the deception, only to consent again to Alec’s assistance on finding her way home, thus indebting herself more so for her desired emancipation from a situation she was forced into initially.

Alec then leaves Tess saying, “Now, my pretty, rest here,” ironically suggesting she has a choice, and leaves her alone in The Chase. She remains in the foggy, dark forest in her confused, weary state; the fog suggests her mystified, fatigued, and forlorn condition in the grove. The darkness only augments her insecure trepidation, and instills a sense of foreboding maliciousness in this fateful situation, in which Tess’ guardian angel is absent. This shows the irony that if Angel Clare would have begun courting her at the dance this chain of events could never have occurred.

Alec returns to find Tess asleep on the dead leaves; her warm breath seems to suggest an invitation. The tears upon her eyelids signify that Tess has already anticipated the outcome of this night, and her sleep is her concession.

Tess’ rape is described metaphorically, herself as gossamer and snow, thus easily taken, naive, and so far untarnished flesh. This predestined event will dominate the rest of her days with coarseness and eventually doom her to death; to sleep with her ancestors whose own sins have, perhaps, wrought Tess’ doom. “It was to be” since the outset of the novel and the subsequent chain of events that followed John Durbeyfield’s discovery of his heritage.