Difference between revisions of "October 19, 2019" 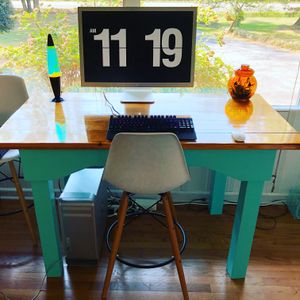 So, I purchased a 2009 dual-processor Mac Pro (2x Intel Xeon E5520 2.26 GHz and 15GBs RAM) a couple of weeks ago. It was a spontaneous decision, really, sparked by watching dozens of YouTube videos about getting used equipment and upgrading it. I'm generally convinced that going used for expensive items really is the way to go. You can get so much more for much less, like a car or a Mac. New is nice, but you really get more for your money with something used.

Anyway, I spent about $300 on the Mac Pro — money I had in my Pay Pal account from eBay sales of random — unused and unneeded — stuff sitting around my house. I made this deal with myself: I would only spend money on this hobby from old stuff I sell. Therefore, I will spend no money on this Mac Pro. Autumn seemed to go for this approach. I really does make the most sense: I’m buying a computer I don’t really need but will use. It’s a hobby. Plain and simple.

I have to add, too: one of the reasons I purchased the Mac Pro is that Giles had an old 30" Cinema Display sitting around that he graciously donated to the cause. While very nice monitors can be had for very little these days, buying a new monitor was a hurdle I was not going to jump. So, with monitor in hand, I got my first Mac Pro.

I had planned to upgrade as I could afford to, maybe adding more RAM each month, eventually leading to a new GPU or processors. However, I decided to sell a Synology NAS I didn’t need and my new (to me) Lenovo ThinkPad. Within a week, I had nearly $500 to play with. W00t!

First, I upgraded the firmware and operating system on an old 250GB SSD. This went well. I had it running Mojave natively in no time with the most current firmware. Even the old SATA 2 SSD was pretty sprightly. I had used it in my old iMac for years.