In his 1997 study of computers and composition Nostalgic Angels, Johndan Johnson-Eilola writes: 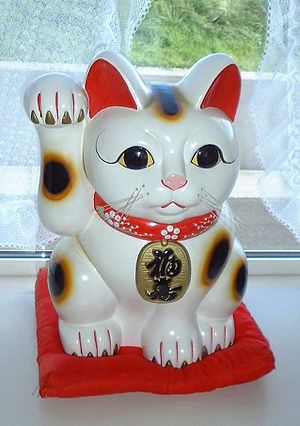 Like Johnson-Eilola, both Lunenfeld[3] and Manovich[4] seem to place us currently within a media flux, in theory and in practice. We can only know the present through our media forestructure — i.e., though sometimes intimate knowledge of our media past and present. Our current media technologies (will) invariably influence the development of new media and how we contemplate and use this media. Indeed, as Manovich speculates, the computer as “meta-medium” may contain the potential to transcend our imaginations and conceptions as we encode various analog forms into digital representations. We are currently caught in this nexus between a nostalgia for the past and a giddiness for the future.

This contention is illustrated in Sterling’s “Maneki Neko.”[5] This story presents a near-future world that lives for and through its network. The contention in “Maneki Neko” stems around the ubiquitous network — an e-karma literally directs network participants into doing good deeds, rewarding the cooperative and punishing the trespassers. Sterling shows the two extremes in this world: Tsuyoshi and his wife follow the whims of the network, but his brother and Louise Hashimoto resist rule by the network, so their lives are plagued by failure and inconvenience. Godlike, the network makes its desires known through personal electronic devices — pokkecons — through which quiescent humans follow each directive, having faith that they will be rewarded.

“Maneki Neko” presents a utopia, but as we know, one person’s utopia is another’s dystopia. Are we ready to be cared for and even directed by a network that we build? The metaphor of the network — a gestalt of tangible nodes — promises communication and contentment for those become another node, but those who resist are locked out from networked humanity. The end of the story sees Tsuyoshi’s brother and Louise escaping to “a sacred place in the mountains” — a rural haven free of the network, where, one assumes, they can interface the old-fashioned way.

“Maneki Neko” comes from an anthology of short stories called A Good Old-Fashioned Future. Sterling seems to be making fun of our current media predicament. Are we like Johnson-Eilola’s nostalgic angels that envision our future based on our sordid past? Can we overcome the prejudiced ideologies and biased media that make up our past, or do we shape the future with a nostalgia for the past? We still cling to the notion of “human” the same way we do to the “book” or “newspaper.” Are these things irrevocably part of our existence, or will there be new digital technologies to transform ourselves along with our media?

How do we view the maneki neko? A terrible image of networked domination, or a freeing presence that will help us evolve? Where do we live? Where do we want to live?

If nothing else, Gary Wolf’s article “The Great Library of Amazonia” makes clear that we are nostalgic angels, still clinging to an epistemology of atoms while at the same time looking forward to the freedom of bits.[6] In fact, one of the reasons that western capitalism is able to continue its economic paradigm of control is based on this nostalgia, this longing for permanence, perhaps, that digital media does not suggest. One can touch the pages of a book, but that experience is not replicated by an electronic text. Yet, at the same time, many capitalist giants like the RIAA and the MPAA are reeling by a shift in how we listen to music and watch films. Here, digital media has surpassed the atom successfully and has challenged this capitalistic paradigm of control, yet where the digital falters allows the business machine to retain control.

While we still might want the physical artifact of the physical book – both the symbol and container of western knowledge – we want to be able to digitally manipulate the book. The distinction here seems analogous to the card catalog and the online database. The latter offers almost instant access to the information we need, while the latter presents a ponderous waste of time and space to find the same information. Hence, why flip thorough the book for marginalia or the precise passage when a search engine for your library would be much more efficient? Find what you’re looking for, then consult the physical book for the information. As Wolf makes clear, all of Amazon’s efforts are to sell more physical books, but their approach makes people, especially the companies that represent copyright holders, nervous, just as the RIAA and MPAA are nervous about illegal file sharing.

One of the most fascinating aspects of computer technology is its ability to challenge dominant paradigms. As Lev Manovich mentions in his introduction to the New Media Reader, much of this challenge can be located historically in the avant-garde movement of the 1920s, summarized by Ezra Pound’s call to épater le bourgeois. Pound wanted art to awaken the somnambulant masses to new possibilities, and the computer does just that.[7] Not only does it invoke fear in the capitalist giants, but it also challenges us, the users, to envision artistic production and what we define as art in new ways. This fear promotes a challenge that should engage us and the industry not to rely on traditional modes of though in regard to art and technology, but to attempt to see new ways that this technology can serve our mutual ends. Instead of lawsuits and sanctions, we should seek new ways to make a profit – if that is our goal – that will encourage and allow the development and use of new technologies.

As both Manovich and Murray[8] point out in their respective introductions, what and how we conceive of art will necessarily have to change as well. Instead of letting our technology become and remain invisible – a way that supports technological hegemony – we should challenge the technologies presented to us, adopting only those that serve our desired ends and not those of the capitalist.

For instance, do we really want Microsoft to continue to act as an unchecked technological monopoly, insinuating itself into both our new media and our cyberculture. Indeed, as these aspects of our life become more dominant in our daily lives (think: do you spend more time at the computer than driving your car, watching TV, etc.?), doesn’t that also increase Microsoft’s hold over us and how we perceive reality? If we want our microprocessing technology to enhance our physical world, do we really need one entity controlling how that world is enhanced? Windows is buggy in almost every respect (just crashes and viruses alone make many users paranoid and unable to be productive nor creative); why do we continue to use it when better options exist? Because, as Manovich opines, they have released their products so quickly that they have become transparent, or invisible, not giving us time to consider they should be “an assumed part of [our] everyday existence, something which does not seem to require much reflection.”[9] Not only do we need to reflect and challenge what seems compulsory to use if we want to use computers at all, we need to decide just what aspects of our lives need to be digital.

Let’s take art, for instance. What do we mean by “art”? Is art something rarified and untouchable, reserved for a distinguished and exclusive crowd, or is it something that we should have access to on a daily basis? How does design fit into art? Just because something is quotidian, does that make it somehow undeserving of “art” status? New media seems to only offer additional confusion: are operating systems – as Murray and Manovich suggest – considered art? Video games? A search engine? New media, in Murray’s words, provide “a single new medium of representation, the digital medium, formed by the braided interplay of technical invention and cultural expression at the end of the 20th century.”[10] Since Murray still makes the distinction between the humanist and the engineer, we still have old paradigms informing how we perceive new media. Is art solely a product of the humanist, and technology of the engineer? New media is where these cultural expressions come together in new forms that can only be products of microprocessing technology. Creativity – an integral aspect of both the humanist artist and the engineer – must be employed if we are to survive the current transition from the old into the new. Also, a collaboration between the two may spark and force us to redefine just what it means to be human. Isn’t technology just as important as art in this case?

Are we then bound to old paradigms because of comfort or tradition, or do we wish to see beyond these classifications through the lens of new media? Instead of being afraid of or blinding embracing the new, we should turn a critical and conventional eye in its direction and ask ourselves how it makes us better. Do we define ourselves based on how much money we have, or are there more concerns that we should have as humans?

Retrieved from "https://grlucas.net/index.php?title=Nostalgic_Angels:_New_Media_Today&oldid=4063"
Categories:
This page was last edited on 14 July 2019, at 10:31.
Privacy policy
About Gerald R. Lucas
Disclaimers