Notes on Sheri Tepper’s The Gate to Women’s Country

Andromache is the epitome of the loyal wife in the Iliad. She was married to Hector, son of Priam, and with him had two sons, Astyanax (Scamandrius) and Laodamas. After the fall of Troy, it fell to the Greek council to determine Astyanax’s fate. However, the seer Calchas prophesied that Astyanax would grow up to avenge Troy and his father, Hector. Odysseus tells Andromache that if Asty­anax cannot be found to be sacrificed, Calchas has ordained that Hector’s ashes must be strewn over the ocean, and his tomb destroyed. Andromache decides to remain loyal to her son, but Astyanax is found and sacrificed.

Cassandra was the most beautiful of the daughters of Priam and Hecuba, the king and queen of Troy. She was given the gift of prophecy by Apollo, who wished to seduce her; when she ac­cepted his gift but refused his sexual advances, he deprived her prophecies of the power to persuade. At the end of the Trojan War, Cassandra foresaw the danger posed by the Trojan horse; the people of Troy ignored her warnings and the Greek soldiers hiding inside the horse were able to capture the city. During the sack of Troy, Cassandra was raped by the Locrian (or “lesser”) Ajax, and was then given as a war prize to Agamemnon. She returned to Greece with Agamemnon, and tried to warn him of the danger which awaited him there; once again her prophecy was ignored, and both she and Agamemnon were murdered by Clytemnestra and Aegisthus.

Hecuba is the wife of Priam and Queen of Troy. Mother of the Trojan cham­pion Hector, Paris, Polyxena, and Cassandra (among others). One story has her given to Odysseus after the fall of Troy, but she is turned into a dog by the gods and allowed to escape. 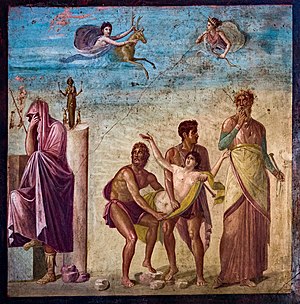 Iphigenia is best known as the daughter Agamemnon, leader of the Greek forces at Troy, had to sacrifice in order to appease Ar­temis. Agamemnon, or perhaps one of the troops in the Greek force of Menelaus (the brother of Agamemnon) offended Ar­temis, the virgin goddess of the hunt either by killing one of her sacred animals and/or by boasting immoderately that his hunt­ing skill exceeded even that of Artemis. Artemis sent a contrary wind, which held the Greek fleet in the bay of Aulis, where it had assembled before sailing to Troy. The prophet Calchas divined that the daughter of Agamemnon would have to be sacrificed to atone for the offense. Agamemnon then summoned Iphigenia from home under the ruse that she was to be married to Achil­les. In a version of the story, when the sacrifice was about to be made, Iphigenia is miraculously transported to Taurus, a city on the Black Sea, and an animal sent in her place.

It is interesting, and perhaps significant, that the story of Iphigenia’s sacrifice is not mentioned in the Iliad or the Odyssey, despite there being ample opportunity and reason to do so. The earliest source for the story is in the report of the lost Homeric Cypria (which is usually thought to date one to two centuries after the Homeric epics). In the next source, Aeschylus’ play The Libation Bearers (c. 460 BCE), Clytemnestra, the wife of Agamemnon, mentioned the killing of Iphigenia as part of her justification for killing Agamemnon upon his return to Mycenae after the Trojan War. The two plays of Euripides, Iphigenia at Aulis, and Iphigenia at Tauris, are centered on the story of Iphigenia. The story also gets minor mention in Hesiod’s Cata­logue of Women and Eoiae 71, which reports that she was changed into the goddess Hecate instead of being sacrificed.

Iphigenia was sacrificed for the Greeks, signifying the beginning of the Trojan War with the launching of Greek ships. Polyxena is Iphigenia’s Trojan counterpart. Polyxena, however, was sacri­ficed in Troy, signifying the end of the war. Polyxena was the youngest daughter of Priam, king of Troy, and Hecuba. According to legend, when Achilles caught sight of Polyxena, he fell in love with her. According to some accounts, Polyxena pre­tended to love Achilles and therefore learned of his vulnerable heel. Polyxena, probably at the prompting of Paris, sent for Achilles and asked him to meet her to arrange marriage. Achilles came and Paris, who had been hiding in the bushes, shot Achil­les in his vulnerable heel. Achilles died in the arms of Odysseus, Ajax, and Diomedes, all of whom had followed him to the tem­ple. Achilles asked Odysseus, Ajax, and Diomedes to sacrifice Polyxena at his tomb after Troy was defeated. It is debatable whether he asked for this sacrifice out of love (in the hopes to marry her in the afterlife) or out of revenge (for he would have known she betrayed him).