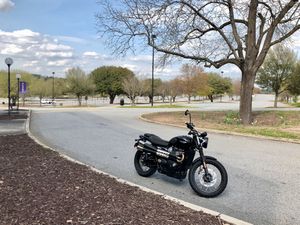 After a morning of coffee and updating my web site—I’m still working on my London 2009 journal entries and images—I took a long motorcycle ride to campus. With the winter lining removed from my jacket the temperature was just right when I was moving. Yes, spring has definitely arrived.

I took Rivoli west to Bolingbroke, then cut down to Zebulon. I rode west on Zebulon until it ended, passing a dude on a while BMW RT along the way. A turn south took me to Thomaston, and another left had me riding back toward Macon. It occured to me that I should have checked to see if there was a road I could use to cut through to GA-80—I’m sure there is, but I didn’t check, so I just rode all the way back to Tucker/Heath and took that south.

I know it was Saturday, but campus was deserted. That seemed a bit eerie in the shadow of C-19. I passed a campus police car parked under a tree on my way in, but there were no other signs of life. I wonder if this will be the norm for a while, as I walked into my office not bothering to even take off my helmet as I would not be staying. I grabbed the book I can for and paused to be sure I had my keys. The cop was still sitting in the same place as I left. I waved, but I couldn’t tell if anyone was even in the car. 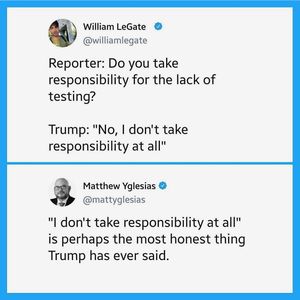 Trump is a failure.

On the way home, I considered stopping for a Coke to mix with my bourbon tonight. I decided not to and rode back via Log Cabin. Traffic seemed right for a Saturday.

As the evening went on, I kept thinking that I might not be taking self-isolation as seriously as I should. When the worst-case prediction has as many as 200,000 to 1.7 million people at risk of dying in the US, this is serious. The New York Times article states that we must change our behaviors—“testing for the virus, tracing contacts, and reducing human interactions by stopping mass gatherings, working from home and curbing travel”—to mitigate the effects of the virus. I realized that I fully intended to keep going to Orange Theory. This is foolish when I just advised my mom not to go to church. At least at church, they aren’t sweating and panting around each other. If they are, then the Catholic mass has changed significantly since I attended.

President Blake, too, just sent an email “instructing all faculty and staff to telework from off-campus with immediate effect . . . to reduce the number of employees physically on campus to the minimum required.” I hope this means Autumn will not be required to be on campus at all. I think we’ll have to wait and see on that one.

So, as much as it pains me, I’m going to stop going to the gym for a while. I’m still going to ride my Triumph, though.