From Literature to Literal 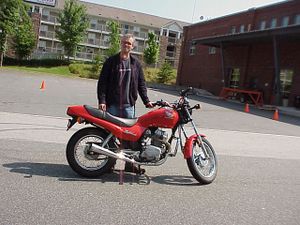 My ride for the day.

I have only had a literary relationship with motorcycles until this morning. While the literature that I have combed through, both in book and Internet form, only bolstered my enthusiasm for my eventual first ride, I have never been behind the controls of a motorcycle and in-control until this morning when I took my introductory class Atlanta Motorcycle Schools. It was a beautiful morning for a lesson, and I arrived a few minutes early, just after the sun made his first appearance. I promptly met Ken, JoAnna, and Phil, my instructors for the day. I had my newly purchased Schuberth helmet and BMW-logoed gloves; I was ready to ride.

After a few minutes, the other student arrived. Robin had had some experience before that day, but I could only claim to have been a passenger. After Ken familiarized us with the basic controls of the bike — all of which I had been memorized long before from diagrams in various books and the Georgia State learner’s manual — and before the sun had made it over the building, we were on the bikes; mine was a smallish Honda that seemed a bit awkward at first, but she and I became quick friends.

We began with basic skills, including balance and coordination, something that my many years on the back of a bicycle had well prepared me for. Soon, we had started the engines and were playing with the clutch to find the “friction” point: this play in the clutch would assist with slow maneuvers and initial navigation. Unlike learning on a car with a manual transmission, this exercise was much easier. I quickly found the friction point and was able to walk the bike across the parking lot, like a baby might crawl toward his waiting parents. After the crawl, my right hand turned the throttle, and I was riding across the lot, legs up and against the bike's tank and right hand ready to mash the brake at any moment. While I was a bit nervous, my smile was obfuscated by the bulky helmet, but I know JoAnna shared in my glee with a congratulatory smile as I applied the brakes and came to a stop fifty yards later. My first solo.

While that solo reminded me of how a baby, learning to use his legs, might first stumble and shake while walking around his perambulator to the joyful cries of his proud parents, I was soon going back and forth along the same thirty yards, practicing my acceleration and braking until I was at least as confident as a novice. I still have a bit of trouble controlling the sensitive throttle, and my braking isn’t perfect all of the time. I know that these skills will take some more practice on my BMW R80/7, but I now feel confident about continuing on my own.

After these essential skills, ones that Robin mastered as quickly — if not quicker — as I did, we went on to shifting gears and then left and right turns. By this time the sun was smiling down on our activity and my awkward helmet and clothes were starting to get a bit steamy, but I continued to run through the drills barely noticing the slight cramps in my hands and legs. After a break, we finished the class early by running through a short obstacle course and practicing our controlled braking. My two “victory” laps after the lesson felt strong and fairly confident, and I was left ready to ride my own bike at Mom’s next weekend — hopefully.

Our instructors presented us with a certificate of completion, and Ken proffered his, apparently rare, praise: “You both will make excellent bikers one day, because you both want to be excellent bikers.” He could tell. By the time I left, my face hurt as much as my clutch hand from all of my stupid grinning. Before I left, Ken took a picture of me behind my bike for the day. There’s also a small video of me going through the cones.

I would like to thank Ken, JoAnna, and Phil for their professional and enthusiastic instruction. I appreciate your your tips, advice, and experience that you brought to this course and shared with me. I also enjoyed the one-on-one attention that I received during the four-hour class. While the time flew by, and I was ready to continue well into the afternoon, the price of admission was small, and I look forward to continuing my tutelage in their intermediate course.