Penelope to Ulysses
By: Ovid (from Heroides) 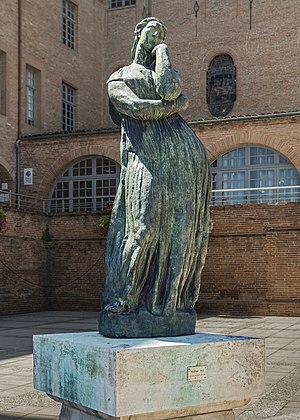 DEAR Ulysses, your Penelope sends this epistle to you, so slow in your return home; write not any answer, but come yourself. Troy is no more, that city so justly odious to the Grecian dames: scarcely were Priam and all his kingdom worth such a mighty stir. Oh, how I wish that the infamous adulterer, when he sailed for Lacedaemon with his fleet, had been swallowed up by the raging seas! I had not then lain cold in a solitary bed, nor thus forlorn complained of the tedious days; the pendulous web would not then have tired my tender hands, while by such means I sought to elude the lingering nights. How often has my apprehension magnified your dangers? Love is a passion full of anxiety and fear. I often fancied you to myself assaulted by furious Trojans; and on hearing the name of Hector always turned pale. If any one informed me that Antilochus had been slain by that hero, the fate of Antilochus proved the cause of fresh disquiet to me; or, if informed that Patroclus had fallen in counterfeit armour, I lamented that this stratagem should fail of success. Tlepolemus had stained the Lycian spear with his blood, my anxiety was renewed by the catastrophe of Tlepolemus. In fine, as often as any fell in the Grecian camp, my fond heart was chilled with icy fear. But the righteous gods had regard to my chaste flame; my husband lives, and Troy is reduced to ashes. The Grecian chiefs have returned; our altars smoke; and the spoils of the barbarians are offered up to our gods. The matrons present grateful gifts for the safe return of their husbands; they in their turn sing the fate of Troy, constrained to yield to their better fortune. The good old men and timorous maids are stricken with admiration; and the eager wife hangs upon her husband’s tongue as he relates. Some, ordering a table to be brought, describe upon it the fierce battles in which they were engaged, and with a little wine trace out the whole of Troy. This way, they say, flowed Simois; here is the Sigæan field; here stood the lofty palace of old Priam. There was the tent of Achilles; yonder that of Ulysses; here mangled Hector frightened the foaming horses; for old Nestor related all to your son, whom I sent to enquire after you; and he again to me. He told me likewise, that Rhesus and Dolon had been slain; how the one was surprised in his sleep, the other betrayed by guile. You also, my dear husband, alas! too, too forgetful of your family at home, adventured to enter the Thracian camp by stratagem in the night, and, assisted by Diomedes alone, to kill so great a number of men. No doubt you were wonderfully cautious, and did not forget your Penelope before the dangerous attempt. My heart never ceased beating till I heard how you rode victorious through the army of your friends upon Thracian horses. But what does it avail me that Troy has fallen by your hands, and that the spot, where formerly its walls stood, is now a level plain, if I still continue forlorn as when Troy flourished, and my husband is absent never to return? Troy remains to me alone; to others it is destroyed, and the victorious inhabitant tills it with the captive ox.

Now corn grows where once Troy stood; and the ground, fattened by Phrygian blood, produces a rich crop that tempts the hand of the reaper. The half-buried bones of heroes are ploughed up by the crooked share; and rising grass covers the ruins of the houses. Though victorious, you are still absent; nor can I possibly know the cause of your long stay, or in what corner of the world my cruel Ulysses lurks. Whatever stranger touches upon these coasts, is sure to be teased with a thousand questions about you; and, when he departs, is charged with a letter to deliver to you, in whatever region of the world he may chance to see you. We sent to Pylos, the Neleian kingdom of old Nestor; but we thence received no account beside uncertain report. We sent likewise to Sparta; but Sparta, being equally ignorant of the truth, left us uncertain that lands you might be wandering over, or where you could make so long a stay. It would be better for me, if the walls of Troy were still standing. Alas! unstable and unhappy, I am offended at my own wishes. I should know in what part of the world you fought, and dread only the dangers of war; nor should I be without companions to join in my complaint. Now I know not what to fear most. I am apt to fancy you exposed to every kind of hazard, and find myself bewildered in a wide field of care. Whatever dangers arise either from sea or land, these I suspect may be the causes of so long a delay. While I thus fondly revolve these things within myself, your it is possible, are the slave of some foreign beauty (such is the inconstancy of man). Perhaps too you divert her by telling what a homely wife you have, who minds only the spindle and the distaff. But I may be deceived, and this imaginary crime may vanish into mere air and conceit; nor can I persuade myself, that, if free to return, you would be absent from me. My father Icarius urges me to leave this widowed state, and never ceases chiding me for my continued delays. Let him chide on; I am yours, and must be called yours; Penelope will ever remain the wife of Ulysses. He at length is softened by my piety and chaste prayers, and forbears to use his authority. A dissipated set of wooers from Dulichium, Samos, and lofty Zacynthos, teize me without intermission. They reign uncontrolled in your palace, and devour your wealth, our very life and support. Why should I mention Pisander, Polybus, ugly Medon, and covetous Eurymachus and Antinoos, beside many others, who all in your absence live upon the means gained at the hazard of your life? Indigent Irus, and your goat-herd Melanthius, serve to finish your disgrace. We are only three in number, unable to defend ourselves; your wife weak and helpless, Laertes an old man, and Telemachus a child. That beloved boy we were lately in danger of losing, as, against all our wills, he prepared to go in quest of you to Pylos. May the gods grant, that by the order of fate he may be appointed to close my eyes; to close also yours. The neat-herd, swine-herd, and aged nurse, all join in this prayer. Laertes, now unfit for arms, is unable to maintain your right against such a crowd of enemies. Telemachus, it is true, if spared, will arrive at a more vigorous age; but at present he requires his father’s protection. Nor can it be supposed that I am able to drive away this hostile crowd. Come therefore speedily, you who are our only defence and sanctuary! You have (whom Heaven preserve) a son, whose tender years should have been formed to his father’s virtue and prudence. Think of Laertes, and that it is your duty to close his eyes; he now languishes on the verge of dissolution. Surely I, who, when you left me, was but a girl, when you return must appear old and decayed.