I began my travels to Salt Lake City with a run.

Heather was down for the weekend, and since my flight wasn’t until 3:15, we were able to squeeze in eight miles. It was good to catch up. We both have to begin training soon for our marathon this fall. I don’t know; today’s eight was tough. 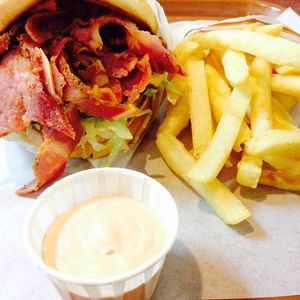 My Crown Burger with Fry sauce.

Autumn had some bagels for us when I returned from my run, and she and I were able to spend the morning together before my departure. While I love getting out of Macon, I will miss my wife. Fortunately, technology keeps us close.

The flight to Salt Lake was as nice as a flight scan be, I guess. I had a row to myself and read Mike’s bio on the way out. Currently, Mailer is a bit loony. He’s in the late-1950s and not handling the poor reception of last two novels. He’s decided to run for mayor of NYC and thinks he could be a good advisor to the newly elected JFK. He just published Advertisements, and “the Trouble” looms. I’m really enjoying the bio; I’m just sorry it took me so long to get to it.

After checking in to the guest house, I explored downtown a bit beginning with the Beerhive Pub. They had an excellent selection of beers, and quite a few local craft brews. I had three: the Red Rock Brewing IPA Junior (pictured below), the Wasatch Brewery Snap Down Header Lager, and the Desert Edge Brewery Utah Pale Ale. I list them in order of yumminess. The Beerhive’s bar has a strip of frost that supposedly helps keep you beer cold. I’m not sure how effective it is, but it was fun to play with.

After a stop at 7-Eleven, I rode TRAX back to the guest house and called it a night. I plan to run in the morning. There’s also a campus tour at 1, and I need to hit Trader Joe’s for some staples.

Welcome to Salt Lake City and the Norman Mailer Fellowship.