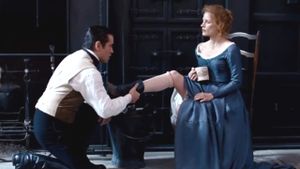 I read this play in graduate school, and I’m surprised that it didn’t make more of an impression at that time. This is one odd play: it seems simultaneously realistic psychologically and surreal—like the illogic of a dream or in its constant shifts, it’s oppressive feel, and its sometimes heavy-handed symbolism. I guess that speaks of its naturalism: it does feel like a Zola novel in its rawness and the threat of the sinister lurking just under the surface. Here are a few random notes and observations.

An important symbol—if not the important symbol in Jean’s case—is delivered by Jean at the beginning of the play: the Count’s “high-top boots with spurs.”[1] They are placed in an obvious location, and remain throughout the play. The boots symbolize an oppressive, cruel, god-like presence that traps the characters in pre-determined roles. The boots are made for walking, and they figuratively keep the underlings downtrodden, protect the wearing from contact, and therefore allow the count to walk unscathed through all kinds of shit. Neither Julie, nor Jean—no matter the steps they take—can escape the influence of the count—even when he is not literally present.

The boots, too, foreshadow Jean’s kissing of Miss Julie’s shoe where she asserts perhaps her most egregious example of control and dominance over Jean. The spurs also align with another symbol of cruelty and control: Miss Julie’s whip. Early in the play, Jean tells Christine about Miss Julie’s “training” of her now ex-fiancé: “she was making him jump over her riding whip—training him like a dog. He jumped over twice, and she whipped him both times.”[2] This trait of Julie’s—her “training”—seems to be a dominant characteristic of her desire to want to dominate and control. Julie seems to associate someone pr something’s obedience as love. For example, the “like a dog” simile alludes to Julie’s real dog Diana who was “unfaithful” to Julie by getting pregnant by the “gatekeeper’s mongrel.”[3] In fact, the whole time Jean tells Christine about Julie and her ex-fiancé, Christine is making up a potion that Jean states “stinks like hell!” to conceivably get Diana out of her “fix,” or her pregnancy.[4] Add to the hurt, it also seems an insult to Julie that Diana deigned to give into her more carnal desires and have sex with a dog that is obviously beneath her station: a mongrel. Perhaps, this situation might be a synecdoche for Julie’s relationship with Jean.

Another key animal symbol is Julie’s canary Serena. The bird makes its appearance late in the play, as Julie and Jean talk of fleeing south, yet unable to do so. The caged bird symbolizes this contradiction: they are both trapped by the cages of class, experience, and genetics. They can sing of escape, but the cage remains firmly closed. Jean’s final act of beheading the bird also symbolizes the death of any hope that Julie, or himself really, might have to flee. It’s almost as if Serena was all that was good about Julie, and it was so easily dispatched by Jean to where both realize the inescapable horror of their positions: “It’s horrible! But there’s no other way for it to end. —Go!”[5]