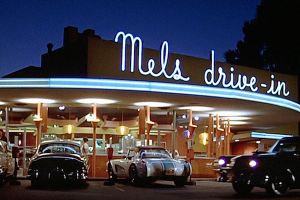 I watched George Lucas’ American Graffiti on Thursday night. Apparently, Lucas made this movie while he still had a writer’s subtlety and insight — you know, before he began writing fantasy. It occured to me that this movie does more than most in capturing a quality that seems uniquely American: a product, of course, of 4000 years of Western civilization, but something that combines a cold-war zeitgeist of individualism and leadership with a longing for freedom.

American Graffiti — a 1973 film about coming of age in the early sixties — celebrates nostalgically a post-war naïvité beginning to feel the pressures of responsibility, of becoming an adult who must come to terms with his and her position in the world. There is a place for cruising and rock and roll, but how do these things prepare us for a role in the world? The political and social implications revolve around three central character types: the person who wants to, but cannot escape the comforts of home (Steve); the rebel who stands for freedom and individuality, but who is caught in that institution (Milner); and the person who does manage to get on the plane, doing his best to ignore the siren call of home (Curt). America, it seems to me, is all three of these types, both in 1973 and even more so today.

American culture does its best to uphold an image of individualism: be who you are. However, it also does its best to destroy any dissention it sees threatening its way of life. American culture sprays its graffiti all over the world in a form of ubiquitous cultural imperialism. We have done so well in propigating our own culture, that there is no longer any plane to board, since everywhere we go now is America — the small town that beckons. American graffiti (not the film now, but the metaphor) does its best to cover everything with messages of individualism and rebellion, but demands a sacrifice of these very traits in its advocates. Like the voice of Wolfman Jack in the film, American graffiti is everywhere in the night, calling, demaning respect.

In Lucas’ 1962, one could still board a plan, like Curt, and follow where the road would lead: another myth of the American road. Yet, it seems to me, that many of us are like Milner and Steve, perhaps with a great desire to break away from home, but finding ourselves always needing to win that next race like Milner or feeling a greater responsibility to another, like Steve. There’s almost a tragic quality in these characters; Milner — after vanquishing Bob Falfa and almost causing the death of two young fools — has a moment of pathos and indecision. He swears to the Toad that Falfa almost beat him. But the Toad won’t have it. Milner is the local hero, and he is needed by those who live in Anytown as a figure to respect: a football star, a gunfighter, a legend. Milner performs a role right out of the American old west by keeping his people safe in their homes. Milner cannot leave, no matter how much he may want to. After the race — the neo-gunfight — he gets on his steed (or, in his hot rod) resigned to his fate.

The film ends with Curt flying east, perhaps suggesting that the western vision of culture has no more to offer. He flies over the mysterious woman who has haunted his vision throughout the film. The image is bittersweet to us viewers raised on this stuff: we want him to get the girl, but he chooses something less-quotidian, less guaranteed. He embraces uncertainty, and he seems OK with that even if we in the audience are not.

Finally, is there hope for Steve? No, he seems never to have escaped Anytown. Summing up these characters’ lives in short sentences (giving us the closure we need as an American audience), the film tells us that Steve bacame an insurance salesman — how’s that for reality kicking you in the nuts?

Milner is hit by a drunk driver and killed by a consequence of culture. A sacrifice to legend.

Curt becomes a writer in Canada. The lesson is and the irony is steely. Is the only hope for America to leave America? What do you think, Mr. Bush?