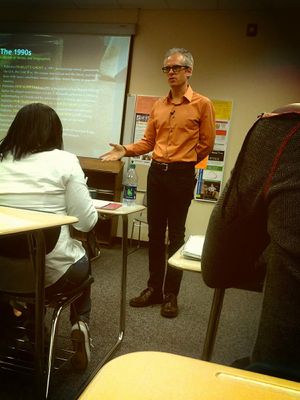 In the classroom, 2013. Photo by Brooke Manolis.

Gerald Richard Lucas (“Jerry”) is an American academic and writer who is a Professor of English at Middle Georgia State University, the Vice President of the Norman Mailer Society, and the editor of Project Mailer. He edited Norman Mailer: Works and Days and serves as the online editor of The Mailer Review.

Lucas was born in Ft. Thomas, Kentucky, on August 18, 1969. He moved to Bradenton, FL, in 1974 and lived there until his early twenties. He attended Blanche H. Daughtrey Elementary School (1974–1980), Sara Scott Harllee Middle School (1980–1983), and Bayshore High School (1983–1987) in Manatee Country. He played trumpet for the Bruin Marching Band, for which he served as president his senior year, and read fantasy and science fiction from an early age. While he did not excel as an academic, his interests in drama, music, and literature seemed to shape his later pursuits.