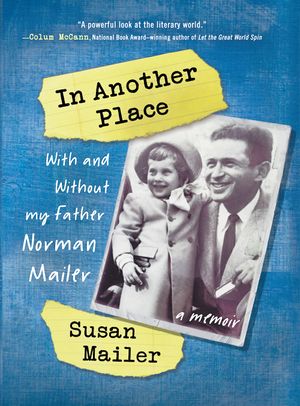 In all, In Another Place is a great read, especially for those interested in Norman Mailer. While I think there is little to glean about Norman that an aficionado wouldn’t already know; however, you shouldn’t read this book for that. Read it instead about a daughter’s relationship to her celebrity father and how that displaces her life initially, but how she learns to bridge that distance between herself and and her relationships, but, more importantly, how she is able to ultimately come to terms with herself and her own sense of belonging. Spoiler alert: while Norman explicitly charges Susan with keeping the family together — “This family, our family, is a fine tapestry. I want you to make sure it doesn’t unravel.”[2] — it’s her time with the family that allows her to do that. For me, this is the one of the string messages of the book: the necessity of a strong, close community to make one feel human and needed.

Finally, if I had one criticism it might be that Susan let Norman off too easily — she might be too ready to vindicate his life. Near the end of the memoir, she states that “many times” Norman told her: “I cannot be the father you want me to be. My mind is captured by my ideas and by the need to write them.”[3] This seems extraordinary coming from someone who didn’t believe in birth control. Someone who had seven children. Someone who had six wives. Yes, one can respect the honesty, but at some point you have to grow up. This is not to say that Norman is not due some sympathy — and I can certainly empathize with him on my bad father days. I guess it has to come down to Susan and her relationship with Norman. In Another Place does not pull any punches, and even presents some cringe-worth moments, but I wonder if it doesn’t let Norman Mailer off too easily.