From my own twentieth-century standpoint, the relationship between Aeneas and Dido in the [w:Aeneid|Aeneid]] is anything but a facile matter. Aeneas, more than Dido, is ruled by fate — his job is ultimately more important than his social life. Dido, while the ruler of Carthage, does not have as rigid a destiny as Aeneas; therefore, she was able to forsake her duty for her “husband.” So, as is most often the case, the woman forsakes her career and ambitions for the sake of love — thus propagating the view so prevalent within our society: her work is never as important as his. In addition to Dido’s sacrifice, a lack of communication, responsibility, and bad choices constitute Aeneas’ and Dido’s relationship.

The primary gods in the Aeneid do not take as active roles in the epic’s action as they did in Homer’s epics. Virgil’s pantheon is symbolic, whereas the gods of Homer directly affect the progression of events. Indeed, a different interpretation of the Aeneas/Dido relationship would be forthcoming if Virgil’s gods were understood in the same light as Homer’s gods. If this were the case then Dido never had a chance — fate indifferently marked her for death: Jupiter sent Mercury to Carthage “to make the lands and the citadel . . . hospital to the Trojans, in case Dido, in her ignorance of destiny, should bar her country to them,” and Aphrodite sent Cupid, who “can laugh at the thunderbolts” of Jupiter, to “breathe fire and poison” into Dido who “will not know.” Well, Dido has two strikes against her before she even encounters Aeneas. Yet, this would be too simple an exegesis in which every action is blamed upon the gods — choice, indeed, influenced the outcome of events.

Aeneas is not much of a talker when it comes to amorous relations — nor is Dido for that matter. The latter many times “would be on the point of speaking her mind to him [about love] but checked the words on her lips,” words which “she could not declare.” Finally, in the shelter of a cave, Dido “no longer kept a love as a secret in her own heart, but called it marriage, using the word to cover her guilt.” Aeneas, as usual, said nothing just silently going along with the woman. Aeneas is garrulous when it comes to his exploits and the struggle of the Trojans, however he never proclaims his love for Dido — never offers a commitment.

Yet, Aeneas silently dallies in Carthage with Dido “laying the foundations of a citadel and putting up buildings” wearing “a rich cloak given to him by Dido.” When Aeneas is admonished by Mercury his “hair stood on end with horror and the voice stuck in his throat. He longed to be away and leave behind him this land he had found so sweet.” Just like that Aeneas decides that he has wasted too much time with Dido and furtively seeks his getaway: “tell no one,” he orders Mnestheus, “and keep secret the reason for the change of plan.” Ironically, Aeneas the hero of Troy and founder of Rome, cannot break up with his girlfriend. Yet Dido gets wind of his surreptitious plans and confronts the hero: “you traitor, did you imagine that you could slip away from this land of mine and say nothing?” She, too, reminds him of their “marriage” and her political sacrifice: “I am hated because of you by the peoples of Lybia. Because of you . . . who used to be my husband.” Yet, Aeneas, in anticipation of the law-abiding stoicism of Rome, overcomes “the anguish in his heart” and says “It was never my intention to be deceitful or run away without your knowing . . . Nor have I ever offered you marriage or entered into that contract with you.” Aeneas’ true love is his duty to his people: “Apollo . . . has commanded me to the great land of Italy . . . that is my love, and that is my homeland.” Finally, Aeneas has spoken, impaling his own desires (and those of Dido too) on the sword of duty. 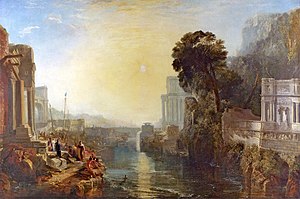 So Dido loses her land and life by the fate of Aeneas. Yet, by his own choice, he stayed in Carthage with Dido for a long time, never telling her that someday he would be off. Aeneas chose not to talk, and he chose to stay — he made the motions of being a husband, but, perhaps became bored with the mundane life in Carthage and longed to fulfill his destiny. Doesn’t this sound like a line? This is an excellent twentieth-century interpretation — Aeneas, the victim of a mid-life crisis. He had already moved slightly away from Dido by overseeing the construction of her city and all that was left to do was to make that final break.

This reminds me of two similar situations: one from Shakespeare and one from Star Trek. The former is from Henry IV, part 1, when Hotspur is taking leave of Kate. He, too, has no time for love, and, although their banter is fun, it also smacks of seriousness: “Away, Away, you trifler! Love! I love thee not, / I care not for thee, Kate; this is no world / To play with mammets and to tilt with lips; / We must have bloody noses and cracked crowns.”[2] Hotspur believes, like Aeneas, that he has a kingdom to found, yet he has only death where there is no love; his duty robs him of life. Aeneas’ duty also seems to rob him of his life. Perhaps this is the fate of heroes?

Spock, having just saved the Enterprise at the cost of his own life, tells Captain Kirk that “the needs of the many outweigh the needs of the few.” This is, perhaps, more attributable to Nisus and Euryalus, two friends that, on the surface at least, sacrifice themselves literally for the good of the many. Aeneas also sacrifices himself and Dido for the good of the many. Duty over life for the hero seems to be a grim responsibility for the hero. That is probably why there are so few heroes in the world, especially now.

Certainly Aeneas loved Dido; however, it is not until he encounters her again in the Underworld that he truly feels his love: “Alas! Alas! Was I the cause of your dying?” — hey! no kidding, Aeneas. Yet, Dido will not forgive him and turns her back on him as he did to her in Carthage. Aeneas, however, soon moves on to fulfill his destiny.

Retrieved from "https://grlucas.net/index.php?title=Aeneas_and_Dido&oldid=2388"
Categories:
This page was last edited on 21 January 2019, at 12:29.
Privacy policy
About Gerald R. Lucas
Disclaimers